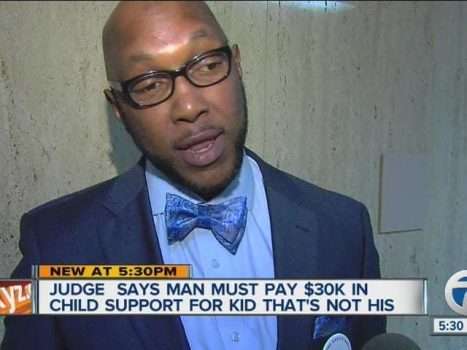 Unfortunately for Alexander and other men in similar situations, the state does not require any proof to be provided when naming the father on forms. Instead, the responsibility is passed to the person named to then prove that they are not that person. The state sends a summons and the person named must appear at that time.

Many people are unaware of the importance of appearing in court when summoned. In cases regarding child support and paternity, failure to appear results in a default judgment and the person named is then legally responsible as the father.

Mr. Alexander, however, can prove that he never received the summons as he was in jail at the time. The process server delivered the letter to a relative instead of directly to him. The state also sent following letters to an address where he no longer lived.

He did eventually find out about the order in 1990 after being stopped for a traffic violation and then being told that he had a warrant out for outstanding child support. He then did go to court, where he attempted to clear up the matter. Without the money to afford an attorney, Alexander did not have the resources to know that he needed to file a specific motion to dispute the paternity.

The mother of the child has even asked the court to forgive his debt, and the court did forgive the portion of the debt that was to be given to her. They are still insisting that he pay the $30 000 that is their fees and interest on the unpaid child support.

Despite DNA evidence, the request of the mother of the child, the actual biological father being known and being a part of the child’s life, caseworkers being aware of the actual biological father’s identity, proof that he never received the original summons and having told the court at all hearings that he attended that he was not the father, the court recently ruled that because Alexander did not file the appropriate paperwork within the appropriate time – 3 years after birth of the child or 1 year after the Order of Filiation (declaring the man the father) is entered – he is still responsible for the back child support.

Regrettably in this case, despite having acted in a reasonable manner, Mr. Alexander is still being hounded by the state and threatened with jail time. Due to the publicity around his case, he now has an attorney working with him pro-bono and hopefully they will be able to clear his debt to the state.

If you are ever in a situation that you cannot afford an attorney, keep looking – there are many resources that will provide free or low cost legal advice. Get ahead of legal issues as best you can.